I am a NaNoWriMo failure. This month I was going to sit down and write a novel; the goal of the program is 50,000 words. I signed up and created an account. I choose a genre and created a short idea of what my book would be about. I was ready to go. The world, or at least close friends, would be forced to read my 50,000 words about anxiety and bad decisions. The book would be a somewhat autobiographical account of a woman nearing her 40th birthday.

I never wrote a single word. As of the writing of this blog post it is November 10. I suppose I could try to catch up, but I am really discouraged at this point. I have been playing a little blame game trying to make excuses for why I haven’t been writing, not just not writing the novel, but not writing in general. What if I have already run out of things to say? Maybe we have a limited number of words in us and I have used most of mine up.

Depression probably plays a part in my lack of writing. The holidays are coming in fast: Thanksgiving, Mom’s birthday, and Christmas lead to a general sense of “bah humbugness” in our house. Work has been busy lately and at the end of the day I feel like I have no more words to give. Saidee has been sick. School has been consuming with an online class I’m taking. All of these are excuses for why I haven’t been writing, but they aren’t good excuses I know that.

If I am not capable of writing 50,000 words in one month, I could surely keep the blog updated with a once a week post. But to be honest I am having a problem with that as well. On my phone I have a list of blogs I have started and not finished.

I have ideas; I am just currently lacking the ability to get them on the page. What if I am word impotent? What if I can’t get the words up anymore? What if my words are sitting in matching bathtubs and holding hands while looking at a scenic view? Do other people feel like this and worry?

This is a blog I write for me as an outlet and for my friends for their entertainment. How much pressure must it be to actually write for a living? In a perfect world one of the pitches I send to xojane.com (first person and real life experiences, hell yes, please) would be picked up and I would start writing freelance and be a beloved commentator. However, this is not a perfect world and I am attempting to write 750 words on how I have nothing to write about. This is a sure sign that I am trapped in a strange Seinfeld-like world where nothing is really something.

So to recap: I failed at NaNoWriMo. I haven’t had a good blog post in a while. I am in a slump. I let my clothes sour in the dryer (that was not part of the blog post, but they smell of sour hell and you should know). I will now put on my Lane Bryant big girl panties and attempt to get over myself.

Thank you for listening to this pity party. 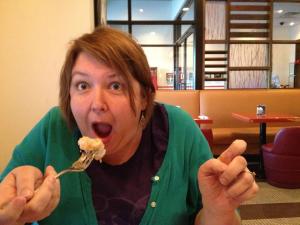 Until I am able to give you a better post please enjoy this photo of me eating.

She wore her anxiety like a name badge: Hello, my name is self doubt with occasional loathing and sadness. But really, deep down, Rachel wasn’t sad, morose, or languishing; she was just anxious. Sometimes she thought her blood felt like driver ants consuming her insides like they would cattle in an African village. When she thought of that comparison she smiled a guileful smile knowing that she was a pretender. The only reason she knew of driver ants was from an Oprah Book Club book she had read in her twenties. In the car on her morning commute Rachel would think back to the moments that she felt defined her; moments that if she had made a different decision would have possibly altered her life. It was her own personal butterfly effect and she knew that it was senseless.

On this morning drive Rachel flicked at her wedding band. A steady rhythm of nerves: flick, flick, flick, her thumb against the white gold band. A physical manifestation of her inner agitation. The radio played; the morning radio show did their ridiculous voices and callers called to discuss the topic on hand. The air conditioner was on three of four and blew her hair. For a split second Rachel stopped the flicking to pretend her hair was being blown by fans at an InStyle photo shoot. In the fantasy would be her smiling face, her hair shoulder length and artfully wind blown. On her thin wrists would be Jennifer Myer bracelets, each bracelet as dainty as the women in the picture. In this fantasy she was thin, dainty, and graceful, with the kind of beauty that was accepted by other women. She had originally found popularity as a twitter personality and eventually became a regular on Jimmy Fallon, who had offered her a cameo in an upcoming movie.  Another caller to the radio show breaks the fantasy and she moves on to thinking about her decisions. How many had been hers to make and in how many had she been just a silent participant?

The first time she had sex had been a misunderstanding; an ill attempt at talking dirty had led to the quickest sex ever on record. Sure, she could see how it happened. They had been making out for what seemed like hours, mostly naked and pressed against each other on a comforter that was beige with small pink roses.

“I love you,” he whispered.

“I love you too,” she whispered back.

Rachel was sure that more needed to be said.

“I wish you could be inside me,” she decided to add.

And with that her virginity was gone, him on top and pumping. Her body was scootched off the side of the bed. With the last pump she could see the digital clock; it read 3:48. Her virginity was gone in under a minute. Like any good control freak, the next logical step was to make him sit with her and read a pamphlet on teen sex and pregnancy. Which, of course, he did with no complaint, mostly because he was in love and a little sticky. Her accidental deflowering aside, sex was something that Rachel thought about often on her commute.

Now that she had recounted the accidental deflowering, the flick, flick, flick of her ring once again started and Rachel marked that experience into the her-mistake-to-make category. She had said the words that led to the act. This one was a clear mark in her column. The recalling made her smile; virginity was there to be lost and really there was no regret here.

The radio was pulling a phone prank and it made her skin crawl. The idea of intentionally making someone uncomfortable and angry made little sense. It seemed mean, but the intended victim always laughed in the end with an added, “You’ve got to be kidding me.” Flick, flick, flick went the thumb against the wedding band as the pre-recorded laugh track played behind the gag. The insistent laughter saying, “don’t be uncomfortable; it is all in good fun.”

Every morning Rachel commutes and every morning she dissects her life events. In fourth grade she cried when her paper wasn’t perfect and the teacher mentioned it to the class. In the sixth grade she gave a boy her bracelet so he would like her. Each individual act probed for a better solution. This was her commute.

The idea behind this post is that I am interested in the small amounts of time that this character spends rethinking her decisions and fantasizing about what could have been. How many small, thirty minute periods, are lost to rehashing our old life events?

(2). “For more than two hundred years, the Owens women have been blamed for everything that has gone wrong in town.  – Practical Magic by Alice Hoffman

(3). ”There was a hand in the darkness, and it held a knife.”  – The Graveyard Book by Neil Gaiman

(4). “The human head is the same approximate size and weight as a roaster chicken.”  – Stiff: The Curious Lives of Human Cadavers by Mary Roach

(5). “It was a queer, sultry summer, the summer they electrocuted the Rosenbergs, and I didn’t know what I was doing in New York.”  – The Bell Jar by Sylvia Plath

(6). “My mother is standing in front of the bathroom mirror smelling polished and ready; like Jean Nate, Dippity Do and the waxy sweetness of lipstick.”  – Running with Scissors by Augusten Burroughs

(7). “I wake to the drone of an airplane engine and the feeling of something warm dripping down my chin.”  – A Million Little Pieces by James Frey